Central Bank of the Republic of China (Taiwan)

The Central Bank of the Republic of China (Taiwan) will issue the ninth coin set of the National Parks of Taiwan series, South Penghu Marine National Park, on November 12, 2020. The Central Bank has delegated the Bank of Taiwan to sell the coin sets to the public on a first-come, first-served basis, limited to one set per purchaser at a time. A total of 20,000 coin sets will be issued. Each set costs NT$400.

This coin set consists of five coins, NT$1, NT$5, NT$10, NT$20 and NT$50, as well as a commemorative medal bearing a colored image of Basalt Landscape- Sea Cave on the obverse, and an image of Chelonia mydas and Acropora pulchra on the reverse. This coin set showcases the South Penghu Marine National Park and various natural and cultural wonders within, such as the four islands of southern Penghu made from basalt rock, the Eye of Dongji, the western-style buildings on the Dongjiyu, and the traditional villages on the Xijiyu. It also depicts the biological diversity of the coral reef cluster and reef ecosystem in the park.

We are grateful to the Marine National Park Headquarters for examining the symbols and literature used in the preparation for the issuance of this coin set. 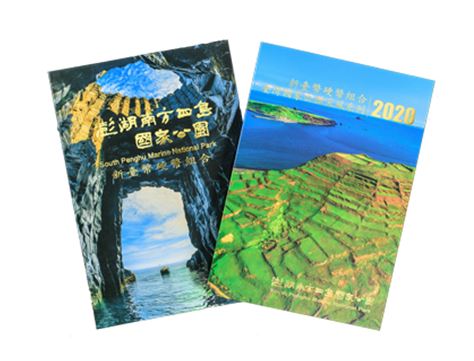